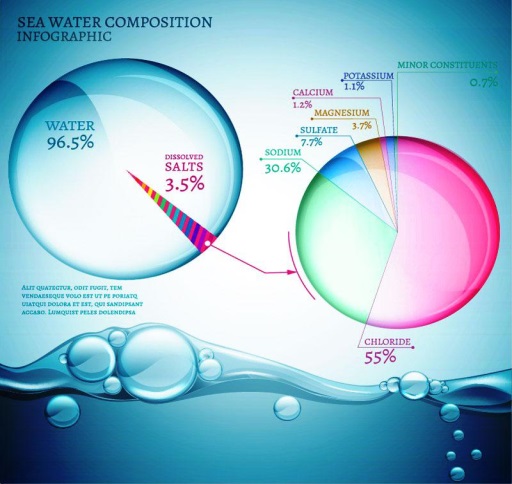 Treating seawater into domestic water is highly efficient, time-saving and cost-effective with RO filtration technology according to the most standard process. Let’s refer the following article now!

(In this article, the main stages are listed for easy reference step by step because the topic of seawater treatment is very wide).

3.6 – Step 6: RO membrane filtration and adding back its minerals

4. Application of RO water after desalination

– About two-thirds of the planet’s surface is covered with water, but only 2.5% of this water is fresh water and 0.3% is suitable for human consumption.

– Salinity is the total mass of dissolved salts (TDS or parts per thousand – ‰ refer to www.coastalwiki.org/wiki/Salinity).

– According to the actual salinity scale, typical “standard” seawater has a salinity of 35‰ or 3.5%, in many places it may be higher or lower. In Vietnam, the salinity is lower, about 25-35‰ or 2.5-3.5% because the seas connect with many freshwater rivers and there is a big seasonal variation. 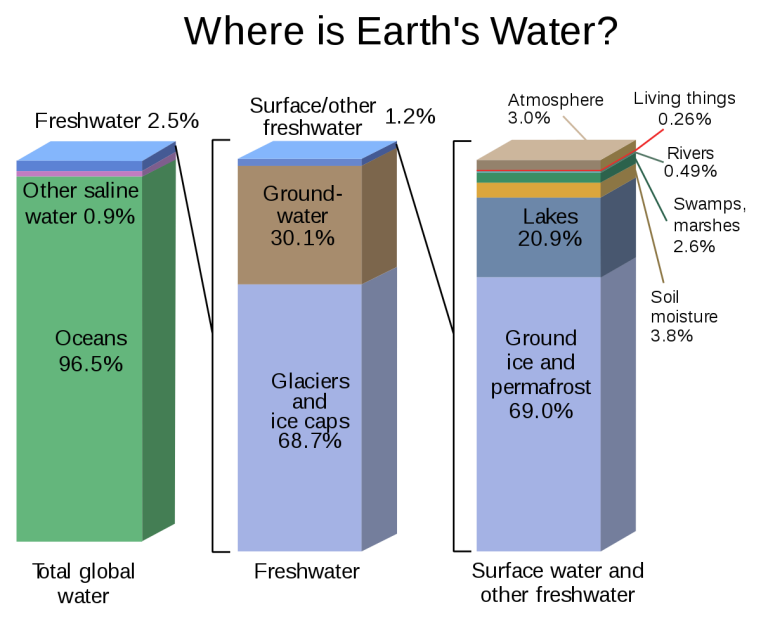 Proportion of water source on Earth

Currently, desalination accounts for about 1% of the world’s drinking water.

– Affecting small species, fish eggs, etc., so the ditch collecting sea water in to desalination needs the lowest speed (0.1m/s) for fish to escape, naturally gravity filtering with sand with its backwash to allow the fish eggs and small organisms returning to ocean.

– Pipelines from the sea to the ground are less expensive, but can be corroded or degraded, contaminating nearby aquifers. Therefore, an amount of tree cover is needed to limit metal ions from entering the aquifer

There are some technologies to separate salt from seawater into Non-salt water. Depending on nature and combination of projects, there may be political implications for national projects.

– Transporting fresh water from other places by large ships or fixed pipelines (For example, Singapore buys water from Malaysia).

– Using heat for distillation, including:

+ Utilize and exchange heat of chimneys of thermal power plants.

– Mechanical filtration with specialized reverse osmosis membrane for sea water is SWRO. This is considered the most popular and optimal solution for small to large capacites.

Because seawater can contain many impurities and high salinity, the filtration will go through some steps, of which 2 important steps are:

The process of desalination into domestic water

Basic description of the 6-step process to treat seawater into domestic water.

Sea water contains about 3.5% salt, it also contains algae, microorganisms, even industrial waste, plastic bottles… that need to be filtered on the channel leading to water from the sea to receiving lakes

Chlorine use is most common from on-site chlorine generators using either available salts in seawater or a higher chloride from rejected water of SWRO system.

The main purpose of this step is to kill bacteria and algae present in seawater, to avoid clogging to the rear filtration as well as clogged to membranes. At the same time, the oxidation of the a part organic matter to increase filtration efficiency in the next steps

To remove suspended substances from water at the highest rate, depending on the concentration and nature of the suspended matter, size of receiving tanks, it is possible to add sedimentation aids such as PAC, Iron alum…

It is possible to use multi-layer sand of different sizes to increase the efficiency of seawater treatment into domestic water:

– Sand filter for particles more than 10 micrometers in size. 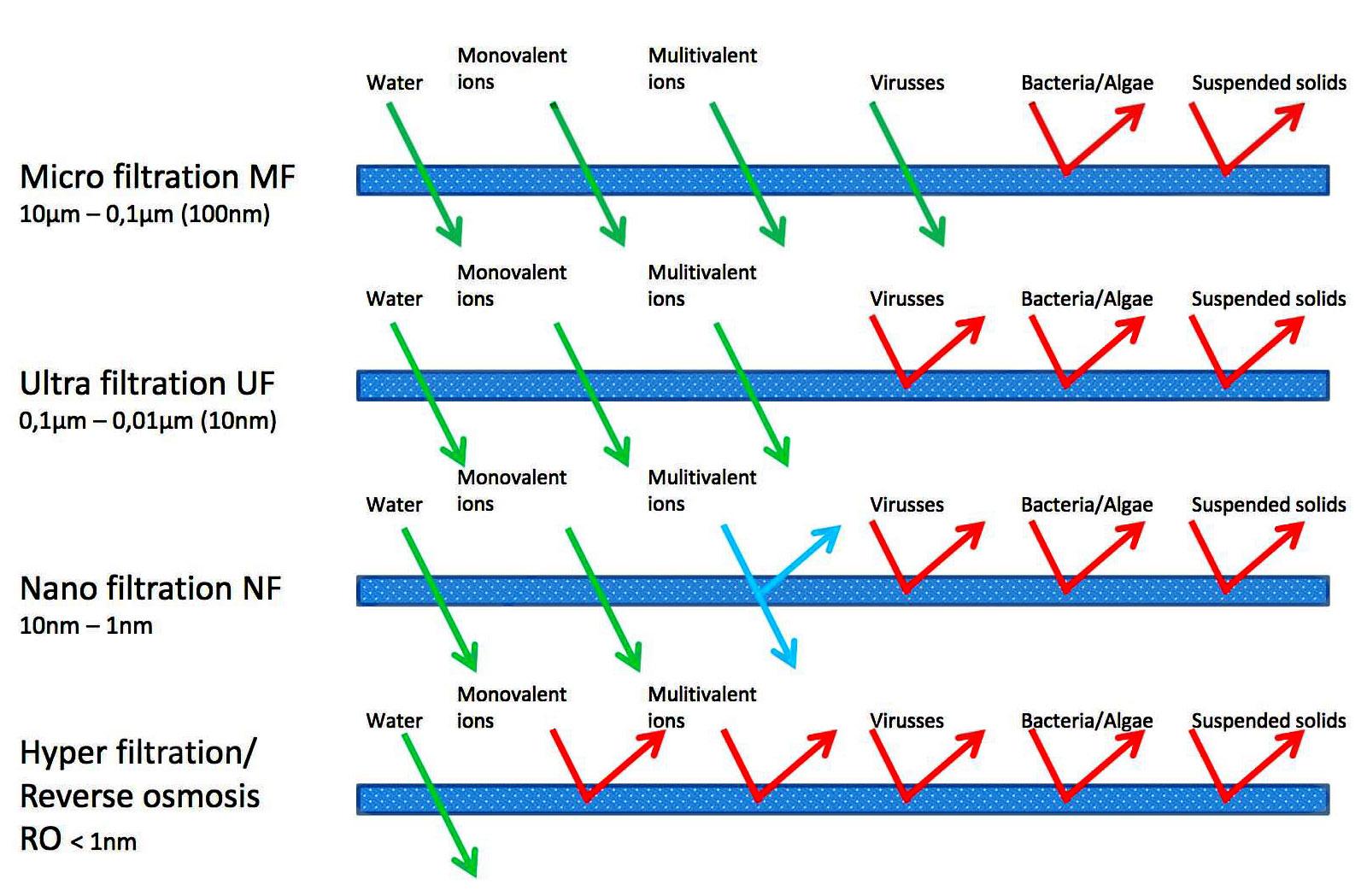 Accordingly, UF and Nano membranes have removed viruses, bacteria and suspended substances. However, UF only allows single and multivalent ions to pass through the membrane. Nano only allows monovalent ions through the membrane to continue to the RO membrane. These monovalent ions are also the main components of seawater. The investment of Nano membrane is higher but the maintenance cost is lower.
Please refer more information at article “What is UF filter and compare with Nano membrane”
https://uce.com.vn/vi/mang-uf-la-gi-so-sanh-mang-uf-va-mang-nano/

3.6 Step 6: RO membrane filtration and adding back its minerals

This is the most important step in the process of treating seawater into non-salted water. Use SWRO reverse osmosis membrane to reduce salt from seawer into brackish water.
Next, filter it again with a BWRO brackish water filter to remove remaining salts from brackish water into salt-free water or almost pure water
If the salt-free water is used for drinking, it is needed to replenish the necessary minerals for body such as Calcium, Magnesium, Potassium, Sodium, Phosphorus, Fluorine, HCO3– … This can be mixed from UF filtered water or independently and automatically dosing for these each component

Note: Some projects may combine Nano/RO filtration instead of RO/RO.

4. Application of RO water after desalination

RO water of desalination projects are widely used in many different fields, including:

– As water supply stations for daily life for residents and cities in coastal areas, having no or lack of fresh water to use. These projects often extremely cost of investment and distribution under the quality management of the State.

Above are informaiton related to desalination into domestic water. Hopefully that it will be less or more useful information to customer who are in concern. Currently, for further information about this topic or other water treatment, please contact us directly – UCE Co., Ltd for the fastest support.